Parkinson’s disease (PD) is a neurologic condition due to the loss of brain cells that produce dopamine. PD is a progressive disorder of the nervous system that affects movement and can develop gradually. Symptoms can be barely noticeable and could be a tremor in just one hand.

Approximately one million people have Parkinson’s disease in the United States and there are around 50,000 new cases diagnosed each year. Parkinson’s disease is the second-most common neurodegenerative disorder that affects more men than women, mostly 65 years of age and older. In early-onset Parkinson’s disease, symptoms appear before the age of 50. Some reports suggest that 10 percent of all cases are early onset. 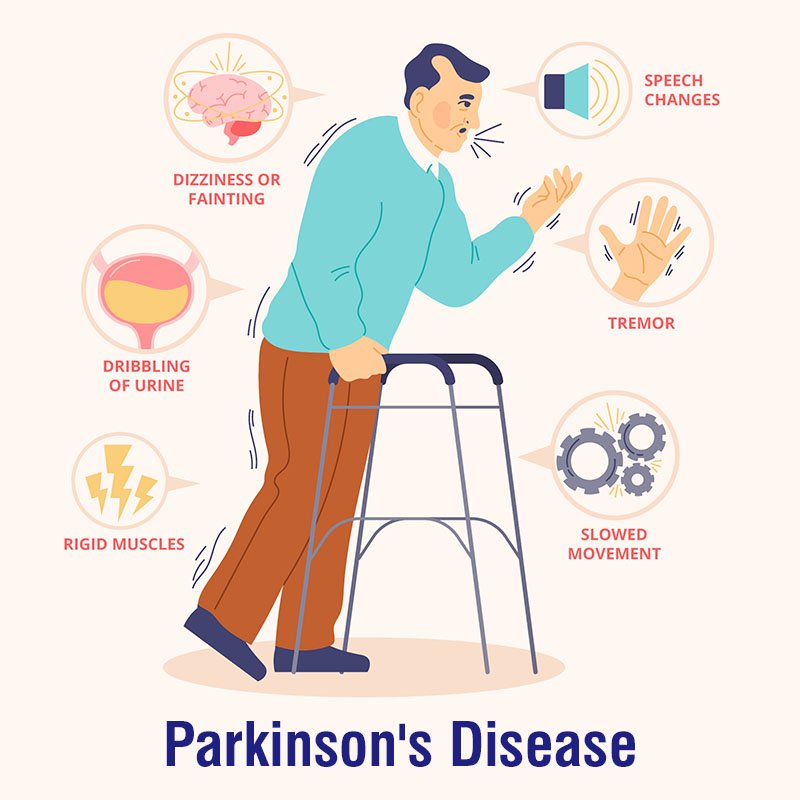 Other symptoms may include:
• Loss of smell
• Limited facial expression
• Trembling in the hands, arms, or legs on one side of the body
• Stiff muscles in the arms and legs
• Trouble with balance and coordination
• Depression and difficulty sleeping
• Difficulty carrying out tasks and memory problems

Treatment for Parkinson’s Disease can include seeing a neurologist, medications, surgery, and treatment plans. There is not a cure for Parkinson’s, but the tremors can be controlled with medications that restore dopamine function. Common medication includes levodopa, which nerve cells in the brain use to make dopamine, and carbidopa, which delays the conversion of levodopa into dopamine until it reaches the brain.

Some patients benefit from deep brain stimulation (DBS), where electrodes are implanted deep in the brain and attached by a wire to a stimulator device implanted under the skin. The device sends electrical signals to the electrodes, which reduces fluctuations and dyskinesias. Parkinson’s Disease (PD) DBS is a minimally invasive procedure that takes approximately four hours. After surgery, your symptoms should immediately improve, and you may be able to reduce the number of medicines you take to control symptoms.

If you or a loved one is suffering from Parkinson’s, schedule a virtual visit with a board-certified Neurologist. Our neurologists will give you answers and provide next-step recommendations.